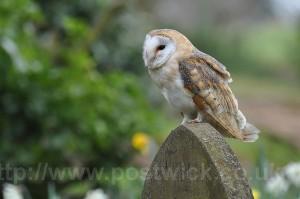 The Barn Owl is a pale, long-winged, long-legged owl with a short squarish tail. Depending on subspecies, it measures about 25–45 cm (9.8–18 in) in overall length, with a wingspan of some 75–110 cm (30–43 in). Tail shape is a way of distinguishing the Barn Owl from true owls when seen in flight, as are the wavering motions and the open dangling feathered legs. The light face with its heart shape and the black eyes give the flying bird an odd and startling appearance, like a flat mask with oversized oblique black eyeslits, the ridge of feathers above the bill somewhat resembling a nose.[3]

Its head and upper body typically vary between a light brown and a dark grey (especially on the forehead and back) feathers in most subspecies. Some are purer, richer brown instead, and all have fine black-and-white speckles except on the remiges and rectrices, which are light brown with darker bands. The heart-shaped face is usually bright white, but in some subspecies it is browner. The underparts (including the tarsometatarsus feathers) vary from white to reddish buff among the subspecies, and are either mostly unpatterned or bear a varying amount of tiny blackish-brown speckles. It was found that at least in the continental European populations, females with more spotting are healthier on average. This does not hold true for European males by contrast, where the spotting varies according to subspecies. The bill varies from pale horn to dark buff, corresponding to the general plumage hue. The iris is blackish brown. The toes, as the bill, vary in color; their color ranges from pinkish to dark pinkish-grey. The talons are black.[4]

On average, within any one population males tend to be less spotted on the underside than females. The latter are also larger, as is common for owls. A strong female T. alba of a large subspecies may weigh over 550 g (19.4 oz), while males are typically about 10% lighter. Nestlings are covered in white down all over, but the heart-shaped facial disk is visible soon after hatching.[5]

Contrary to popular belief, it does not hoot (such calls are made by typical owls, like the Tawny Owl or other Strix). It instead produces the characteristic shree scream, ear-shattering at close range. Males in courtship give a shrill twitter. It can hiss like a snake to scare away intruders, and when captured or cornered, it throws itself on its back and flails with sharp-taloned feet, making for an effective defense. Also given in such situations is a rasp and a clicking snap, produced by the bill or possibly the tongue. It is most recognizable by its “mask-like” face.[3]

Do you need to book an event? Our village hall is ideal for a meeting. Club, Wedding Reception, Funeral, Hobby, Training. Not to mention we are green as we have a wind turbine and heat pump system..

Our village hall is located just outside Norwich. We are literally 10-15 minutes from the city centre.